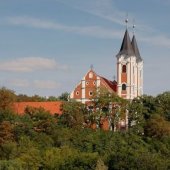 The Máriagyűd Basilica is one of the most popular pilgrimage destinations in Hungary. The reason for this is that for centuries, hopeful pilgrims found rest, quieting of the mind, rejuvenation and healing at the foot of the Tenkes hill.

At the end of the 17th century, Mary appearances and legends were born, according to which there was a Mary statue here before the Hungarians arrived in the region, raised by Slavs, and the place is under protection of the Forrásköz-region Mary Association. The shrine has been looked after by Franciscans since 1689.

The statue standing there today was donated by Bishop Francis William Nesselrode in 1713. Between 1739 and 1742, the church is extended and renovated in baroque style.

In 1950, when the monastic orders were dissolved, secular priests took the shrine over from Franciscans. In the 1990s, the church is fully refurbished.