The Legend of Harka

„Once there lived old Nan here
She had a daughter named Harka
unmatched in beauty in the whole land.”

The ancient legend says that even the devil cast his eyes on Harka, the beautiful daughter of the old witch who lived at the foot of the Harsány hill. The old woman challenged the devil and told him he could only gain her daughter’s hand if he managed to plough the rocky hillside in just one night, by the first cry of the cockerel. The witch, seeing that the devil had almost completed the job, played a trick, and before dawn started making cockerel cries herself. In his anger at failing the challenge, the devil stamped his foot hard and where he was swallowed up by the earth, a hot sulphuric spring has sprung. 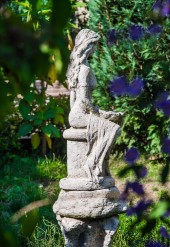